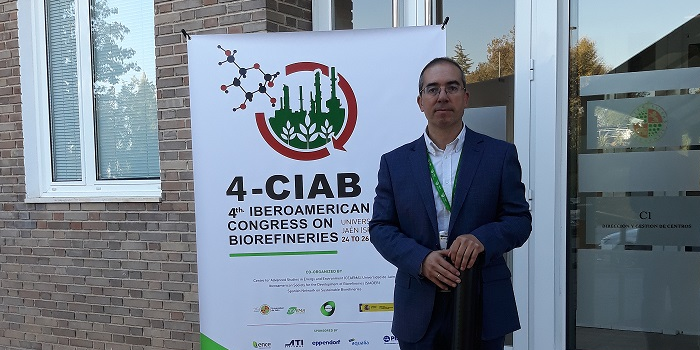 The Iberoamerican Congress on Biorefineries celebrates its fourth edition between October 24 and 26, in Jaén, and is consolidated as the scientific congress in which the possibilities of establishing biorefineries in specific areas are presented and valued. Biorefineries are facilities that make it possible to obtain a wide range of products based on a renewable raw material, such as agricultural waste.

The coordinator of the LIFE ALGAECAN project and researcher at the CARTIF Technology Center presented the main innovations that this initiative proposes, its objectives and the progress achieved so far. The LIFE ALGAECAN consortium is working to design a wastewater treatment system from the fruit and vegetable processing industry, by cultivating heterotrophic microalgae. The objective is to replace the system used until now, traditional aerobic digestion, so that, instead of sludge waste and nutrient losses, added value microalgae are produced.

The Spanish Network on Sustainable Biorefineries and the Center for Advanced Studies in Energy and Environment of the University of Jaén have also participated in the organization of this scientific meeting.

This website uses cookies to improve your experience while you navigate through the website. Out of these cookies, the cookies that are categorized as necessary are stored on your browser as they are essential for the working of basic functionalities of the website. We also use third-party cookies that help us analyze and understand how you use this website. These cookies will be stored in your browser only with your consent. You also have the option to opt-out of these cookies. But opting out of some of these cookies may have an effect on your browsing experience.
Necessary Always Enabled
Necessary cookies are absolutely essential for the website to function properly. This category only includes cookies that ensures basic functionalities and security features of the website. These cookies do not store any personal information.
Non-necessary
Any cookies that may not be particularly necessary for the website to function and is used specifically to collect user personal data via analytics, ads, other embedded contents are termed as non-necessary cookies. It is mandatory to procure user consent prior to running these cookies on your website.
SAVE & ACCEPT
Share This